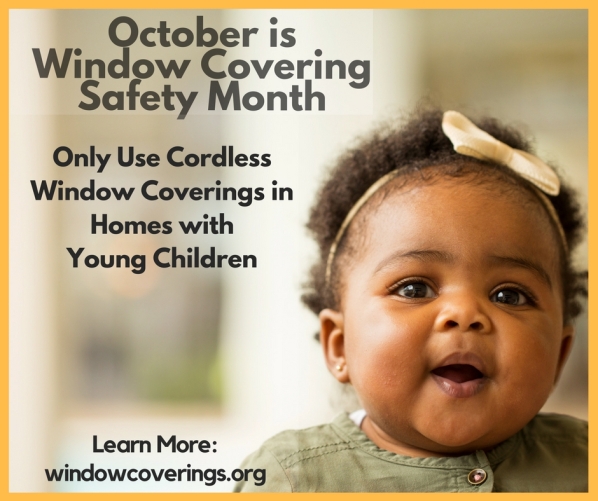 The Window Covering Safety Council (WCSC) and the U.S. Consumer Product Safety Commission (CPSC) want to remind everyone about the hazard window covering cords can pose to young children and pets. The Consumer Product Safety Commission (CPSC) says window treatment cords are one of the top five hidden hazards in American homes, with infants and children accidentally becoming entangled in window cords. Their message needs to be heard by everyone, not just parents or caregivers.

Here are some tips from the Window Covering Safety Council (WCSC) to keep in mind:

Not quite certain what your options are? Hunter Douglas has a wide array of lifting systems for child and pet safety. Also, the Window Covering Safety Council website has tons of valuable  information. 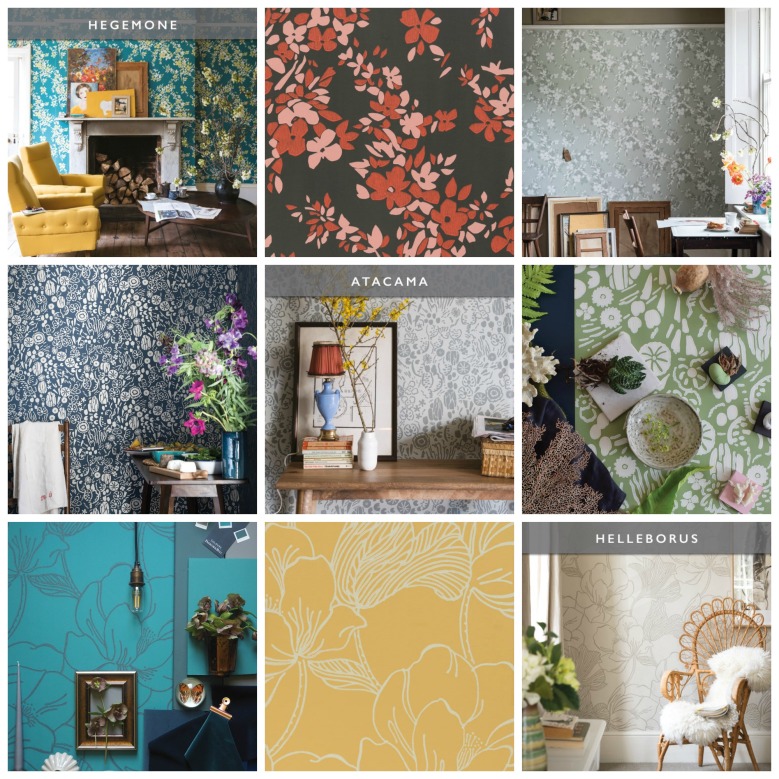 Farrow & Ball devotees know they can count on the brand’s ab-fab paint colors, cutting-edge wallpaper patterns, and exceptional quality. They also know how to be patient. Farrow & Ball introduces only a handful of wallpaper patterns each year and new paint colors are introduced to the Farrow & Ball palette every three years. This year’s wallpaper introductions are three modern floral designs that can work as feature walls or in a whole room. Here are the brand new patterns for 2017 and the inspiration behind them:

Farrow & Ball wallpapers are made in England by craftsmen (and women) who take great pride in their workmanship. Printed with Farrow & Ball paints in a traditional block-printing method gives the wallpaper a luxurious texture. It also makes it easy to create a style that is cohesive and a room that is inviting since you won’t have to try and match up paint colors.

You’ll want to stop by to feel and see the new collection for yourself – available exclusively at our Edina location. 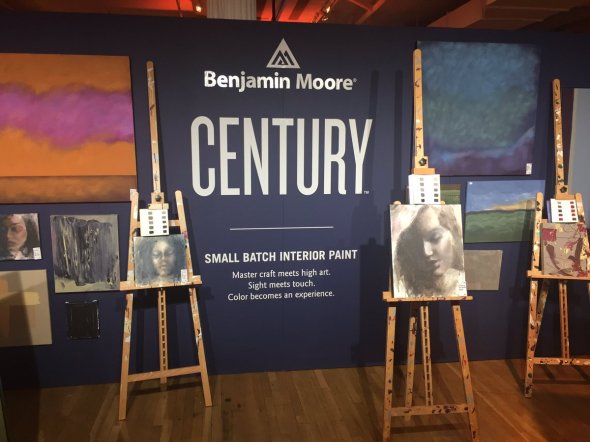 “We needed something for the architects and the designers—something more elevated and more studied,” says Benjamin Moore creative director Ellen O’Neill, who has been working on the collection for more than five years. “So we really went back to the hand of the artists.” It started with texture or, as O’Neill puts it, making “more of a covering than a coating.” She explains: “You can almost see a nap in it when you turn a certain way or see it in profile. It beckons you to touch. 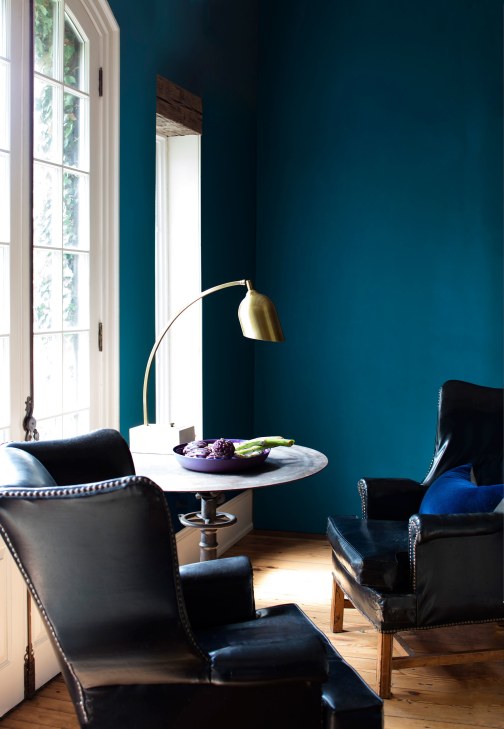 END_OF_DOCUMENT_TOKEN_TO_BE_REPLACED

{how hot is too hot? advice for exterior painting in a heatwave}

When temperatures reach the 80’s or higher, you might not even be tempted to leave the air-conditioned confines of your home or workplace, let alone work on house projects outside.

But these high temps beg a pretty common question — how hot is too hot for painting?

The ideal temperature depends on what type of paint you use.

We recommend 100% acrylic paint for most exteriors, and these latex paints work best when applied in temperatures between 50° and 85° Fahrenheit. However, if you decide to use oil-based paint, their ideal range is slightly broader — 40° to 90° Fahrenheit.

At best, a too-high temp will cause the paint to dry too fast. With too hot of a surface, the paint never gets a chance to adhere and possibly leaving you with a cracked, peeled, or blistered exterior (below). 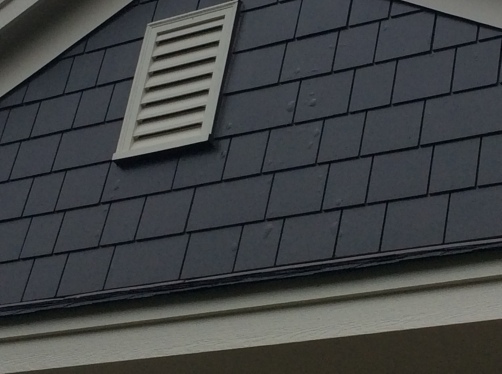 But Midwesterners know that temperature isn’t everything when it comes to working conditions! When painting the exterior of your home, you also have to consider precipitation, humidity, and wind speed.

You probably know that you shouldn’t apply fresh paint during, before, or after rain — but did you know that high humidity can lead to almost as many issues? The paint wants to dry but it can’t dry. Humidity causes condensation, which affects adhesion, which can result in streaks or faded spots.

The wind is no friend to paint.

Windy conditions blow debris into your paint and can lead to uneven drying. If the wind is blowing more than 15 miles per hour, it might even blow you off your ladder! The best wind speed for painting is anything under 8 mph — which is basically a gentle breeze.

Check your forecast for:

If you’re looking for a reliable weather report resource, forecast.io aggregates several different predictions together to give the most likely weather possibility.

Consider the house and the painter.

For best results, paint opposite the sun.

And if you have additional questions about painting conditions, ask the experts in our paint department. They love to help!

Like Loading...
Posted in DIY, Paint Tips. Tags: exterior painting tips, how hot is too hot, painting in the heat, painting your exterior. Leave a Comment »

“With a palette that is both bold and sophisticated, the striking textures of these wallcoverings provide a level of natural beauty, depth and dimension that few other home decor products can rival.” 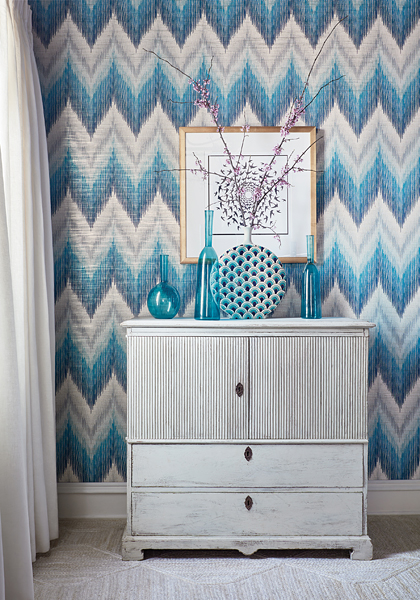 Piedmont is a large-scale printed chevron in multi-color layers. A hint of metallic shines through from the ground.

END_OF_DOCUMENT_TOKEN_TO_BE_REPLACED 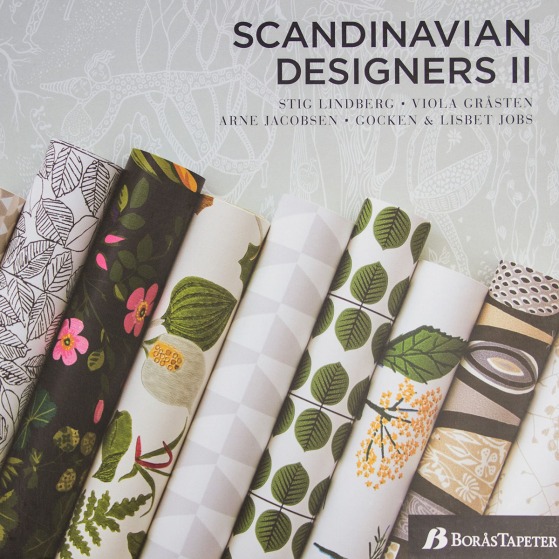 Wallpaper. Scandinavian. Retro. This new wallpaper book has it all!

This collection features patterns from no less than five different designer icons within architecture and pattern design during the 1940’s – 1960’s. Browse through the characteristically timeless, geometric functional style of Arne Jacobsen, the decorative fairy tale patterns of Stig Lindberg, the Jobs sisters’ treasure chest of classic, flowery patterns and the stylish, sketched foliage of Viola Gråsten.

All of the patterns in the collection have a natural, colourful and imaginative touch that make them a perfect complement to the understated, clean Scandinavian interior design. Classic and contemporary have never been more to the point. 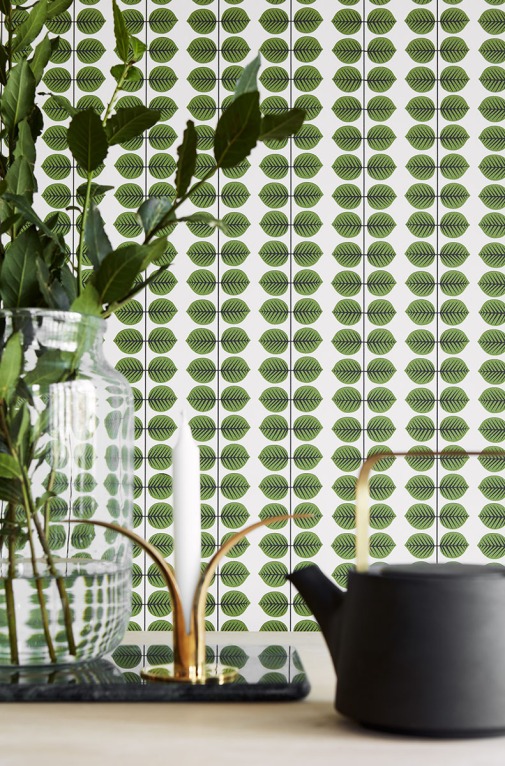 The pattern with its stylized green leaves is one of the most loved by the Swedish people. The china was sold in immense quantities during the 1960’s and is considered an icon in Swedish homes today.

END_OF_DOCUMENT_TOKEN_TO_BE_REPLACED 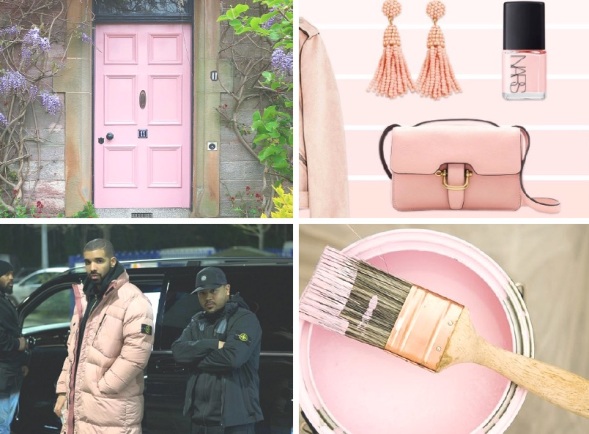 Sonhas Rosa! An old Portuguese phrase for what we are all doing – dreaming in PINK!

It’s no secret, pink is having a moment. Whether you’re wearing it or drinking it (hello rose), it has come to be the defining color of the millennials, so much so that is referred to by many as “millennial pink”. But why? END_OF_DOCUMENT_TOKEN_TO_BE_REPLACED

If you’re shopping for a new home, looking for inspiration, or thinking about a remodel, the Artisan Home Tour  should be on your weekend radar. Step inside these luxury homes, from the area’s most exclusive builders and remodelers, and see for yourself why these are million-dollar-plus homes.

The Artisan Home Tour features 19 new one-of-a-kind homes and two remodels which will be open this weekend, the final weekend of the Home Tour.

The following homes all used products from Hirshfield’s!

{colors of the day: red, white, and blue}

How did the iconic red, white, and blue come to be? These shades now synonymous with freedom, equality, and baseball inspire patriotic pride throughout the country. The rich story behind these historic hues may surprise you. 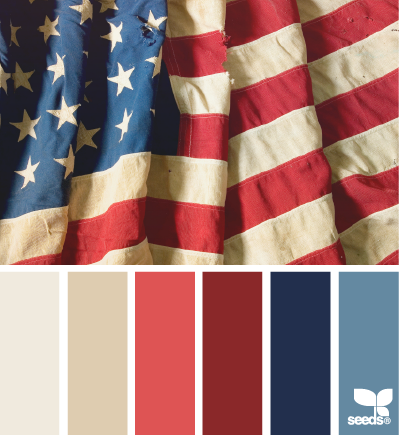 Let red, white, and blue serve as your color palette. 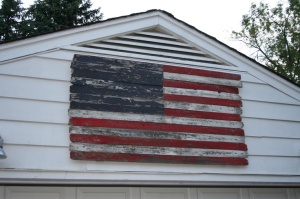 Display your patriotic pride year round with a DIY painted flag.

History of the Flag

What is known is that the first unofficial national flag, called the Grand Union Flag or the Continental Colours, was raised at the order of General Washington near his headquarters outside Boston, Mass., on Jan. 1, 1776. The flag had 13 alternating red and white horizontal stripes and the British Union Flag in the canton.

The first official national flag, also known as the Stars and Stripes, was approved by the Continental Congress on June 14, 1777. The blue canton contained 13 stars, representing the original 13 colonies.

After Vermont and Kentucky were admitted to the Union in 1791 and 1792, respectively, two more stars and two more stripes were added in 1795. This 15-star, 15-stripe flag was the “star-spangled banner” that inspired lawyer Francis Scott Key to write the poem that later became the U.S. national anthem.

In 1818, after five more states had gained admittance, Congress passed legislation fixing the number of stripes at 13 and requiring that the number of stars equal the number of states. Before 1912 there were no specific guidelines as to how the flag should look. President Taft presented guidelines regarding the configuration of the stars in the 48-star flag. The last new star, bringing the total to 50, was added on July 4, 1960, after Hawaii became a state.

Through the words of the founding father himself, we gain a perspective of the American flag. “We take the stars and blue union from heaven, the red from our mother country, separating it by white stripes, thus showing that we have separated from her, and the white stripes shall go down to posterity representing liberty,” interpreted George Washington in 1777.

Today the flag consists of thirteen horizontal stripes, seven red alternating with six white. The stripes represent the original 13 colonies, the stars represent the 50 states of the Union. The colors of the flag are symbolic as well: Red symbolizes Hardiness and Valor, White symbolizes Purity and Innocence and Blue represents Vigilance, Perseverance and Justice.

{how to pick the right paint color for your home}

Painting the exterior of your home doesn’t happen often, so when you’re deciding on a color, you have to be 100% confident that this color will be timeless, elegant, and beautiful.

At Hirshfield’s, we carry countless exterior paint colors to choose from, giving you the freedom to explore to find the exact color you are looking for. 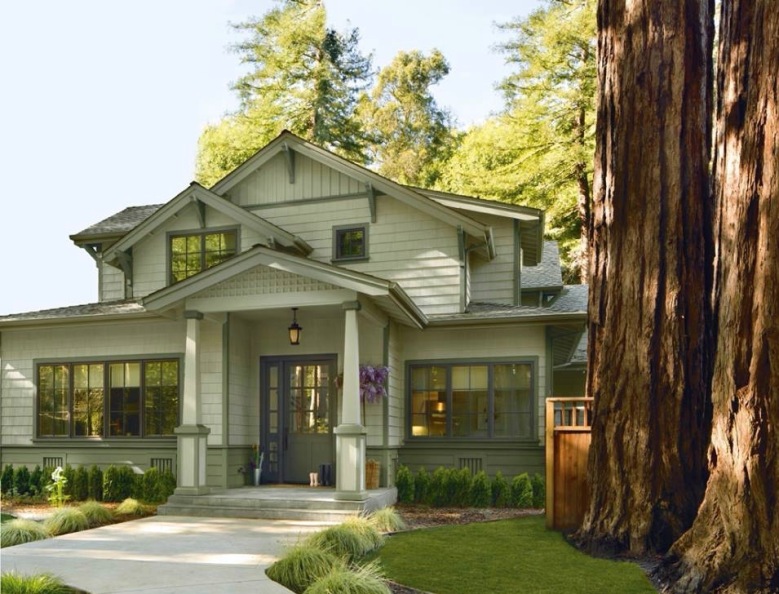 Here are some tips to consider when deciding on an exterior paint color for your home: 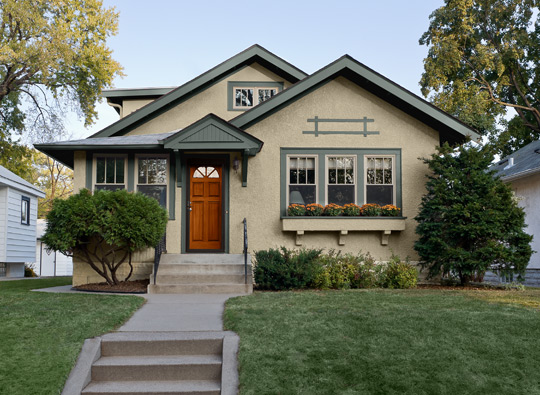 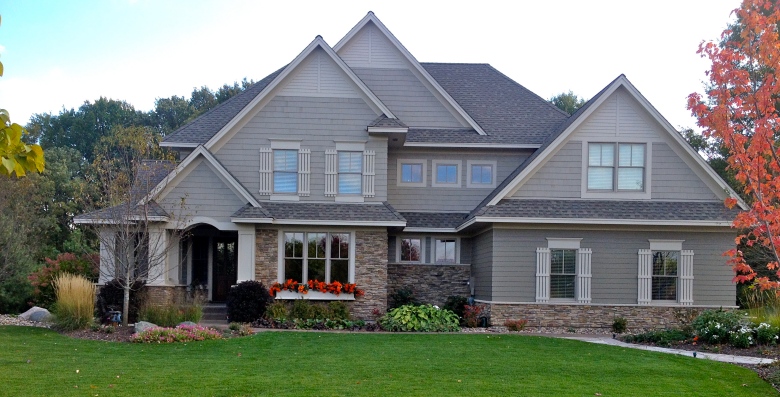 Neutral exterior colors have remained timeless and popular in Minnesota throughout the years. The above homeowner chose a neutral palette which really played up their stone accents nicely.

When selecting exterior paints be sure to check out Hirshfield’s and Benjamin Moore paints for durability, ease of application, resistance to mildew, mold, and UV rays, and overall performance. 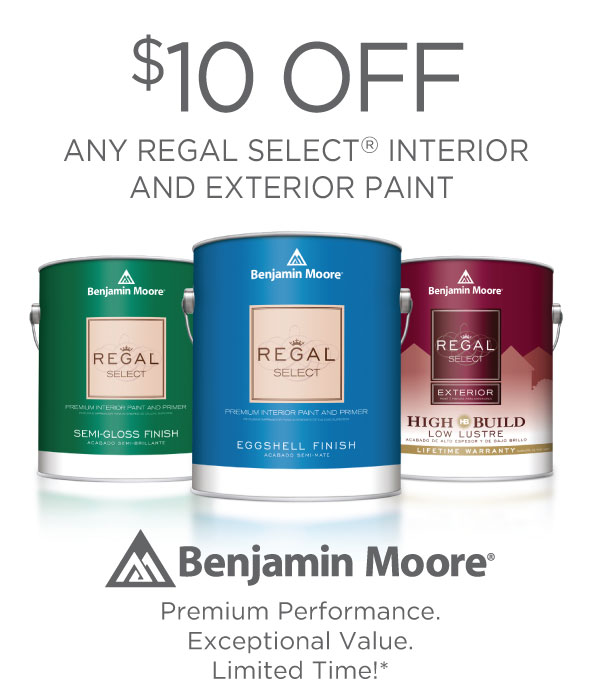 Now through June 17, Regal Select Exterior and Interior Paints are $10 off per gallon.